I just happened to be on facebook and noticed that Marco Baldassari from Sonic Jesus had ‘liked’ The Gluts.

Knowing that Marco has impeccable taste in music, it piqued my curiosity – so I followed the clicks to Bandcamp, found The Gluts’ debut LP ‘Warsaw’, and the opening crescendo of chords on the first track ‘Rag Doll’ did the rest.

Every now and again, a band comes along with all the right ingredients, coupled with that elusive formula for producing immediate goosebumps – The Gluts are one of those bands.

The Gluts describe themselves as, ‘Excess, surplus, too much, saturation, overkill, overload… they are all synonymous of GLUT. Too much of good things, in slang. This is THE GLUTS, a powerful overloaded psychedelic rock. Play to believe. But play it LOUD.’ I could not agree more.

What The Gluts also have in abundance is PASSION, it spills from your speakers and holds your ears and your heart hostage. It is music you will not be able to sit still to.

The Gluts’ sound has a euphoric, gothic grandeur that melds the primordial elements of Bauhaus, Killing Joke and The Cure – the ‘post-punk’, ‘new-wave’, triumvirate mainstays of my youth.

I love this band. I love what their music does to my pulse and my senses. 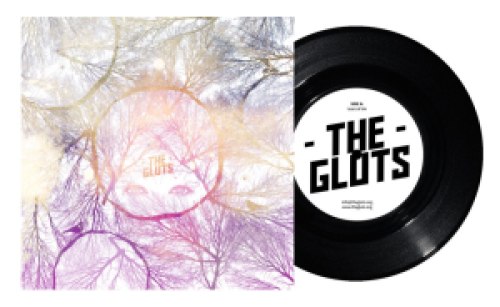 Their first official record came in the shape of the hand numbered, Limited Edition 7” Vinyl titled ‘Tears of Ink’ which was released in June 2013. 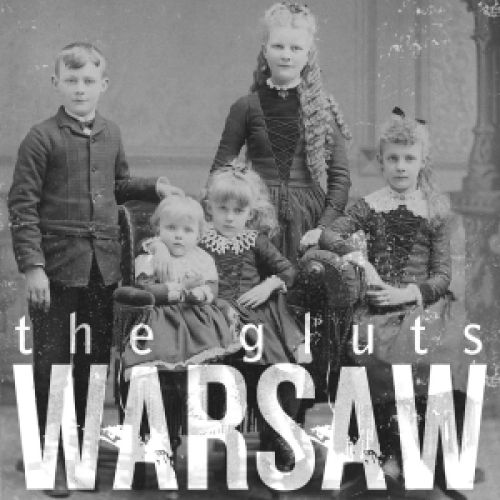 Add to this already potent mix, a formidable live reputation which has had The Gluts described as, “the LOUDEST band in Milan”, and you begin to get the picture.

I recently posed Marco Campana from the band a few questions;

Chr – You are currently on tour in support of the ‘Warsaw’ album, what have been the highlights and what has the reaction to the live set been?

TG – Hi Ian, call it TOUR is a way too much, we are just four guys, well three boys and one girl, which love to play around their own music.

We are happy that without any real help we have been able to set up almost 20 shows to promote our first album. But what we really like about last shows are people reactions.

For these shows, we not only used amps and instruments but also fog, laser and strobes. Everything is manage on stage by us and let us decide when is the right moment to cover the whole stage with smoke or just increase lights tension.

We saw people more IN the show thanks to that, there has been a guy which has said: “I would need at least 10 days to assimilate the experience”

Last show has been in a very small pub, full of people and we loved the situation. Of course when you play in such a place you have to be really punk in the approach. Think that we didn’t have enough sockets for all the amps.

One of the hardest thing is to bring Nico home. He loves to close the pub and drink the last one… which of course is never the last one. You need skills for that and sometimes knowing him since the beginning, as we are brother, is not enough.

Chr – Playing live and doing interviews, are there any questions that you get bored of answering?

TG – Bored questions are all the stupid questions that can find answers in the press kit or something like do you write lyrics first? No we are not dumb, do I look like a poet or a freak songwriter?

Chr – Is there anything you’d like to say that you never get asked?

TG – Well no one ever asked who actually played the drum in our first album, how comes we are three people but four when we play live…and so on. Probably no one from the press even noticed that we are three brothers, well Claudia is not a blood related but she is our sister indeed, and none of us play the drums.

Chr – How do you generate your sound, what equipment do you use – or is that a secret?

TG – There is no secret in how we create our sounds, one thing we do is experiment using what we have.

The focus for Warsaw has been a bunch of boutique cool pedals (Dr. Scientist and Blackout Effectors, just to give you a couple of names), designed for guitar but we used on vocals too.

Having two different guitar amps (orange and fender) in stereo with lots of reverb in it is part of the guitar game and one thing I cannot play without is a pretty old Deluxe Memory Man from Electro Harmonix.

For the new album we are experimenting with a monophonic synth, not sure if we will end using it, pretty wired compared to our typical sound.

I am now personally experiment having two reverb on board, one at the end of the chain (pretty standard) and one as first pedal. A reverb with a fuzz on the tail is what we usually call the WALL OF SOUND.

In addition, a friend of us is running his own boutique pedal company Noise-Militia. I’ve already commissioned a crazy tremolo to him, just to start!

Ah, Claudia is looking for a new amp, any suggestion? 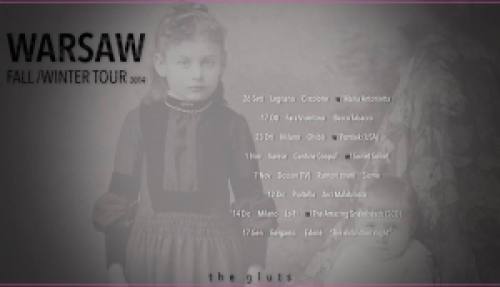 Chr – Any plans to release a single from ‘Warsaw’ and how is the writing for the next album going?

TG – We do not have any plan for a new single so far, what we are now really focus on is the new album. We have five…how to call it? Ideas I guess would be the right word, as they are not songs yet! But we really like how we are approaching this. Improvisation and zero concrete target/goal are the best for a great album.

Chr – Where did the name The Gluts come from and how did you all get together?

TG – The name? Nico visited an exhibition of Robert Rauschenberg, which transformed junk in sculptures. He called those The Gluts. Actually, we liked the idea, thinking it perfectly fits the sound and our attitude too.

We like to say we are three brothers, but the reality is that Nico and I met Claudia during a live show, she was actually playing the bass in the band which played just after us.

A month later, we were looking for a new bass player so we wrote Claudia a super fake email asking if she would know any bass player… the real thing was that we wanted her to play with us so bad!

To celebrate the success and repressing of ‘Warsaw’ on Nasoni Records, which will come in fluorescent pink vinyl with alternative sleeve artwork, the band are having a competiton to win a signed final copy of the first run of vinyl.

Also up for grabs are a couple of signed copies of the debut single ‘Tears of Ink’.

As I said before, I love this band, they manage to push all my buttons without me even realising it. I am sure you will love them too, once you have heard them and let them into your life…