The revitalised, multi-media space that is the 18th century Triskel Christchurch in the heart of Cork, welcomes the gatherers with a projection screen announcing… 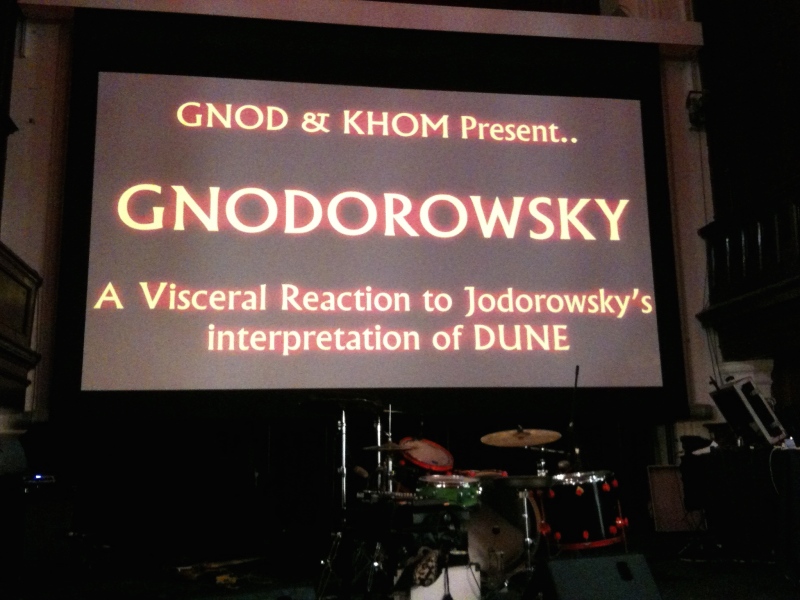 For the uninitiated, and I doubt there are many, the event programme proclaims,

“Europe’s premier purveyors of sonic devilment Gnod will create an imagined soundtrack to arguably the greatest film never to reach the big screen: Jodorowsky’s Dune. This unique event re-imagines the startling imagery, ambition and sheer cinematic psychedelia of the great director’s doomed attempts to bring Frank Herbert’s classic sci-fi novel to life. Working in tandem with visual artist KHOM, Gnodorowsky is a highly unique and multi-layered presentation of musical and visual abandon, a spellbinding calibration of film, music and imagination. Gnod are an Irish/English/Portuguese space noise collective operating out of Islington Mill, Salford. Having formed in 2006, the band have received critical acclaim for their all-consuming live performances, collaborations and prolific recording output.”

It is testament to his inspired vision, that this happening has been curated by Colm McAuliffe, I asked him about the gestation of the collaboration;

“the idea for Gnodorowsky stems from last year when we got the band Teeth of the Sea to remix Ben Wheatley’s A Field In England. This was a massive success and laid the groundwork for these more elaborate cine concerts. After last year’s festival, I saw Gnod live in London – this was the most spellbinding, insane, punishing sonic experience I have ever encountered: the band were feral, intense, explosive – ideal for Cork! Around the same time, I caught the Jodorowsky’s Dune documentary which detailed in startling fashion the great man’s doomed attempts to get his vision of Dune on screen. It made me think: what would the soundtrack have been? And Gnod were the ideal people to approach to imagine this. We asked the band to do this earlier this year and they immediately came on board, along with visual artist KHOM who will provide the visuals for the event. And, of course, it’s quite a good pun as well, Gnodorowsky!”

As stated by Richard Stanley in the ‘Jodorowsky’s Dune’ documentary, “Dune is probably the greatest movie never made”.

Had it gone ahead, the cast would have included Salvador Dali, Orson Welles, Gloria Swanson, David Carradine, Geraldine Chaplin, Alain Delon, Herve Villechaize and Mick Jagger. The soundtrack was to be by Pink Floyd, and the pre-production conceptual artists included Chris Foss, Jean Giraud (Moebius) and HR Giger, under the supervision of Dan O’Bannon.

Every science fiction motion picture following the production collapse of Jodorowsky’s Dune in 1975, owes a debt of gratitude that is rarely acknowledged.

Colm McAuliffe makes a brief introduction, the band takes the stage, the lights are dimmed and the interstellar voyage commences.

Following Jodorowsky’s wish that the movie should open with the longest of galaxy-hopping long shots, KHOM’s visual interpretation folds time and space as GNOD evoke a spiralling cosmic bliss. 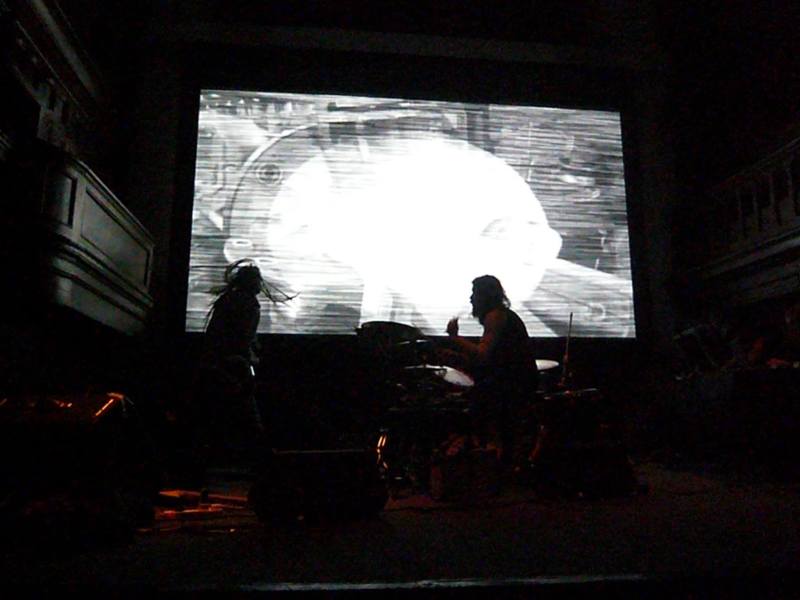 Onward through the Holst-like, interlocked suite of planets to Arrakis, Dune, the desert planet. Sun bleached and sand blown with Tuareg intonations. 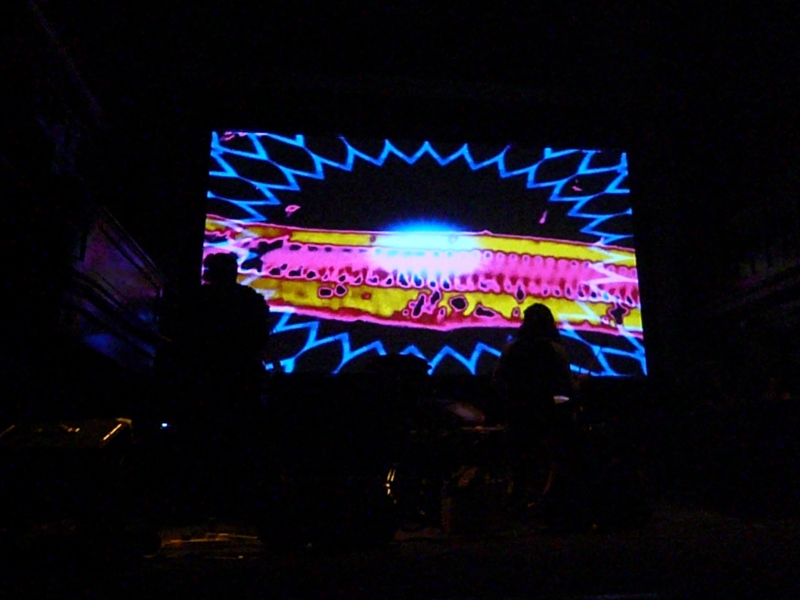 Spice, prescience, ecological and evolutionary jihad. GNOD and KHOM in unison elicit the finale transmutation cycle, from the nucleic to the nebulaic, with mesmeric sensual arrest.

The water of life has awakened the sleeper, a transcendental Gaian future seemingly assured… 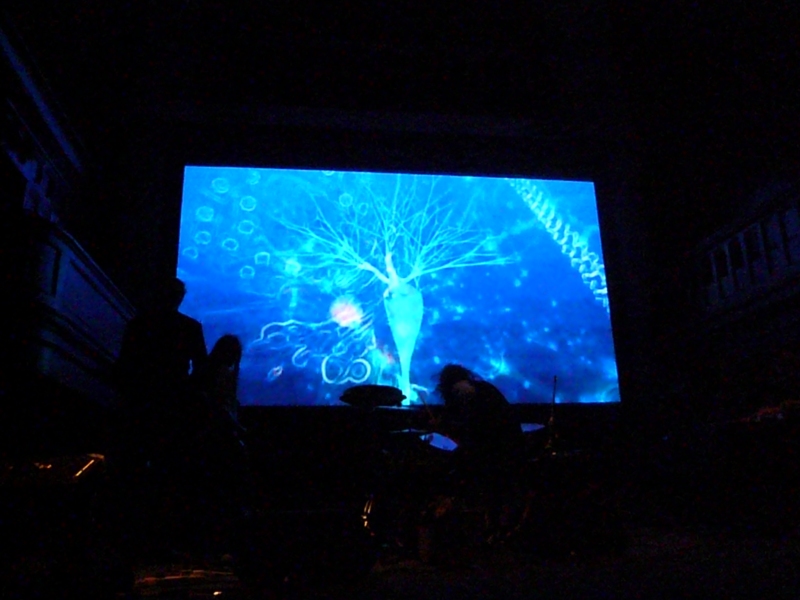 All too quickly, the music and images fade and the house lights wrestle the audience from their catatonic hypersleep.

It is almost inconceivable to imagine anyone other than GNOD, befitting the role of Jodorowsky’s sonic caretakers. Their collective hive consciousness, a seemingly tailored synonym for Frank Herbert’s original scope and vision.

Fortunately, this was the third time this year that I have witnessed all that is GNOD. As much as hearing or seeing GNOD, you FEEL them, they pervade your very being, they invigorate and expand your consciousness, an auricular spice melange.

Following the show, I managed a brief chat with GNOD stalwart Chris Haslam, who told me that they had first become aware of Jodorowsky in 2008 when ‘The Holy Mountain’ was used as a backdrop to their set, and that Jodorowsky has remained a visual stimulus for the band ever since.

In the opening to the ‘Jodorowsky’s Dune’ documentary, Jodorowsky poses a question, “What is the goal of the life? It’s to create yourself a soul.” What GNOD and KHOM have accomplished this evening is an audio visual symbiosis, akin to the creation of a soul, a spiritual awakening.

To paraphrase Jodorowsky, “What I wanted was to create a prophet. To change the young mind of all the world. For me, Dune, will be the coming of a g(n)od. Artistical, cinematographical g(n)od.”

Though commissioned specially for the Cork Film Festival, I understand that there are plans for Gnodorowsky to be witnessed by further audiences, and that hopefully somewhere down the line, it will see a vinyl release.

It was a privilege to attend this unforgettable event, should the opportunity present itself, I guarantee it will leave you feeling the same way…