Reverence, (noun), a feeling or attitude of profound respect, usually reserved for the sacred or divine; devoted veneration… so says the Collins English Dictionary – if ever an event lived up to it’s billing, this is it.

Last year, by the time the inaugural Reverence Valada was announced, I had already committed my meagre gig-chest to attending Liverpool International Festival of Psychedelia – I had felt inexorably compelled to see Goat, on what may have proved to be the last time they would grace the stage of a relatively small, indoor venue, certainly one within reasonable striking distance of Ireland.

I must confess though that as soon as the reports from Portugal started coming in, along with the vibrant photographs, bathed in that peculiar golden glow from the sky, I did wonder if I had made the right decision…

Fast forward a year and the roles have been reversed, thankfully most of the bands at Liverpool this year I have already managed to see, so opting for Portugal and bringing my wife, Sarah along for a thinly veiled “holiday”, was essentially a no-brainer.

There are no direct flights to Lisbon from Belfast so the alarm went off at 02:03. One of my many idiosyncrasies disavows setting the alarm on the hour, and certainly not on an even number of minutes past the hour, no-sir-ee!

Two hours precisely later, we arrive at Dublin airport for the dull and tedious charade of surviving the two hour sleight-of -hand that is corporate extortion. Though Sarah does succumb to the ritual of adding a further, multi-coloured Swatch shop watch to her collection.

By 10:30 we have arrived and successfully negotiated the car hire, with abundant thanks to Alexandre on the Reverence team, and are en route for our hotel in Benavente, a sleepy rural town about 20 minutes from the Festival site in Valada.

Luna Marada have the honour of lifting the curtain on this year’s event at 17:00, so we arrive an hour earlier to soak up the relaxed atmosphere, the abundance of naturally occurring Vitamin D and some Super Bock Caipirinha – the 1927 Portuguese national beer, mixed with the lime flavoured Brazilian national cocktail, a suitably exotic beverage for these uniquely convivial surroundings.

The journey from Benavente to Valada through the rural idyll of the Portuguese countryside, is informed by the realisation we are in tomato country! Pretty much every field, truck and roadside verge we encounter is awash with tomatoes.

Whilst wandering around the Festival encampment, we fortunately bump into event organisers Nick Allport and Jason Fletcher, I am glad to have the chance to thank them personally for their encouragement and organisation in arranging the necessary Press Passes, not to mention their tireless efforts in staging a truly unique Festival in an event calendar swathed with predictability.

Luna Marada, as their name suggests, “are a powerful psychedelic trio. They hail from Manchester, England, but sound more like they’re riding on the earth’s gravitational pull, dancing circles round the moon”. Their insouciant heady brew of, “Grunge, Funk, Rock, & Psychedelia”, is the perfect opener on this balmy sun-kissed Thursday evening, banishing any lingering thoughts of having got up some 15 hours earlier. 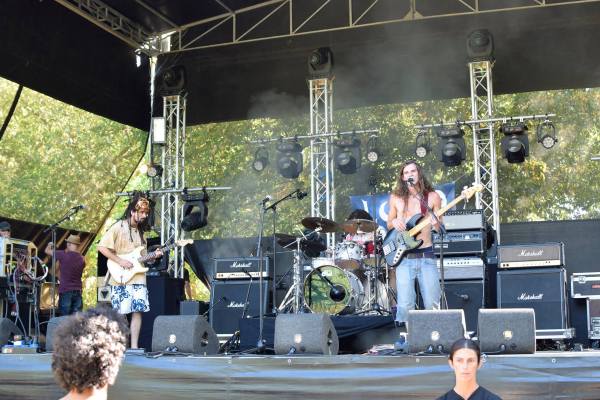 Call me old-fashioned but tonight’s set-up, 8 bands with half hour intervals, all on the Rio Stage curated by Lisbon Psych Fest, is my idea of Festival nirvana. No band overlap dilemmas to contend with, just a leisurely romp through the evening’s proceedings.

Earlier in the week, it had been commented that once all 3 stages got going, it was feasible to catch 20 minutes of every one of the  24 bands on Friday and 25 bands on Saturday – I’d love to know if anyone accomplished that gargantuan feat!

Back to Thursday and the Rio Stage and next up are Beautify Junkyards. A felicitously named gem of a local band whose, “hauntologic and kaleidoscopic sunshine folk tales”, eloquently stirs the lapping eventide. Chanteuse, Rita Vian’s ethereal, transcendent vocals waft in Sandy Denny-like eddying currents.

Time for some nourishment. There had been word of a local spit-roasted porcine delicacy on the menu and sure enough, this did not disappoint! My compliments are conveyed to the Chef with the promise of my guaranteed repeat custom the following evening. 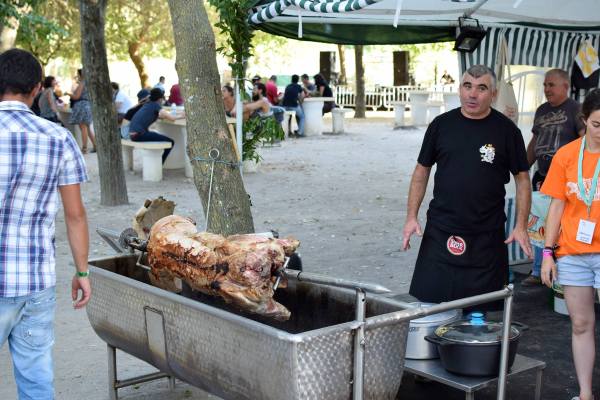 Indeed, as with the Festival line-up itself, the tensile sun-shaded refreshment and sustenance village, is a veritable smorgasbord of liquid and edible delights. None of your plastic pseudo-food on offer here.

Galgo, hail from the Oeiras quarter of Lisbon and take their name from an ancient breed of greyhound. Their, “afrobeat, alternative, dance rock, mathrock”, latin vibes, grooves the crowd into that magical twilight zone in a manner befitting their sprightly, flight-footed namesake.

Chileans, Chicos de Nazca are perhaps the first distinctively “psychedelic” sounding band to hit the stage, the echo drenched voluminous sound of these boys from the Andean foothills, reverberates through this leafy glade, floating on along the banks of the Tejo River. The hints of eeriness to their sound compliments the now all encompassing cloak of darkness.

There is a real buzz of anticipation surrounding Purple Heart Parade, a band surely on the cusp of headlining in their own right. The band’s commitment and work rate has earned them an enviable live reputation, which tonight has preceded them, the air is suddenly heavily palpable with expectation.

At the 11th hour I had somehow been asked if I could review and and interview the band, for an article to feature in the Alan McGee relaunched ZANI magazine, whose strap-line boldly announces, “Online Optimism For The New Beat Generation”, no pressure then…

From the opening anthemic chords of ‘Three Phase’, these Mancunian, astral plane dwelling stargazers, have the full attention of the gathered faithful, they literally have the crowd eating out of the collective palms of their hands.

I had witnessed the band open Liverpool International Festival of Psychedelia last year, and was struck then with the self-assured confidence and swagger they had brought to that performance. A clutch of high profile gigs and 11 months later, to say that they have grown and matured in stature, would be something of an understatement. They have the talent, the ability and most importantly the songs to lift a big crowd and set them down again, mollified and ready for the next enveloping wave to wash over them. I was surprised and delighted in equal measure, to see many in the crowd singing along, an attentive and loyal fan-base is a sure-fire foundation for continued success.

This is Purple Heart Parade’s moment, I for one hope that moment will embrace them as eagerly as they clearly deserve.

The band finish to rapturous applause and cheers, the reciprocity of their energy and commitment to the crowd is shared and slowly dissipated. One of those magikal evenings, forever seared into the memory banks, fuck “where were you when Kennedy was shot”, where were you when Purple Heart Parade played Reverence Valada…

With military precision, my intention had been to fit the interview part with Purple Heart Parade, easily within the half hour changeover slot before The Vickers were due on stage. Sadly that plan went awry with the animated arrival of none other than Supreme Headquarters, Alien Defence Organisation, (1970’s cult TV show UFO), protagonists Col. Paul J. Foster and Lt. Gay Ellis!

One of the unparalleled delights of a festival like Reverence Valada is the safe, secure, even cosseted joy of knowing you are among your own tribe. As a result, the opportunities to meet expansive like minded souls, spirals exponentially. For as much as I may have been initially peeved that my plan, and opportunity to see The Vickers, maybe even say hello to drummer Marco, who I have been acquainted with online, slowly unravelling before my very eyes, there was something about this crazy couple that soothed my reflection in their mirror. You know those sort of people, who you talk to for the first time and it feels like you’ve known them forever, or at least walked a few miles in their shoes? You get the picture.

By the time we managed to wrap up the interview, my gracious thanks go out to Peter, Ste, Keith, Mike and Stephen for being gentle with me, not only had The Vickers, maybe next time Marco, been and gone but Keep Razors Sharp were already well under way too!

Getting close to being awake for 24 hours was also beginning to take it’s toll, so the best course of action was decided on a return to the hotel for some much needed shut eye, punctuated with dreams of tomorrow’s as yet unknown pleasures.