As one of apparently only 7% of the UK population with veins anointed with O Rh-ve, midges and mosquitos tend to regard this blood with envious eyes – singled out like caviar or Dom Pérignon, from the dull palatable herd.

Whether or not Sarah’s Green Witch concoctive brew of yesterday had warded off these bloodthirsty flying miscreants or not, we took no chances and liberally doused ourselves again with; 11 drops Lavender Oil, 10 drops Lemon Oil, 10 drops Lemongrass Oil, 3 drops Tea Tree Oil, Topped up to 15ml with Rose Water for spraying or mixed in with small tub of cream for lotion – we came home with no bites whatsoever, so patent pending!

There was a handful of must see bands gracing the 3 Stages of Day 2 at Reverence Valada, one of which was Blown Out whose LP, ‘Drifting Way Out Between Suns’, I had reviewed last October. Agonisingly, Blown Out were scheduled to hit the Praia Stage at 02:50 – if there was any hope of me making it to that appointed hour, there would sadly need to be some earlier sacrificial lambs. With a heavy heart, the executive decision was taken to have a siesta after lunch and aim to arrive in time for The Warlocks at 18:10 on the Rio Stage.

To my great embarrassment, for all I had heard about The Warlocks, not least a drinking session which left them “Helicon Drunk” in Glasgow, to the best of my knowledge I couldn’t say that I had consciously heard any of their songs. Often, one of the most delicious pleasures of attending a Festival is the discovery of something new. In the case of The Warlocks, this pleasure was intensified in the white heat of realising exactly what I had been missing.

The Warlocks are one of those bands who hit all the bases and make it look so fucking easy. Clearly this ease comes with the years of refinement and fine honing, of a unit at one with their purpose. My borderline dyslexia generally means that I have no idea what a song title is at the best of times, where a back catalogue as enviable as The Warlocks is concerned, ‘Save Us From Ourselves’ and ‘Shake Your Dope Out’, were two particularly stand-out titles that I did catch. The band’s four guitar sonic onslaught, oscillated every molecule of my very being, such sweet, rapturous enveloping music. To say I was an instant convert would be misleading, I was born to hear this.

The danger signs however were all too apparent, how in the fuck could anything else tonight possibly top this?!?!? 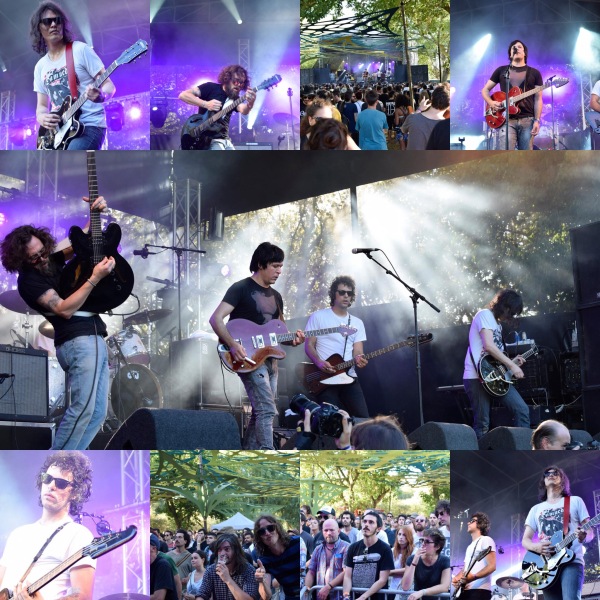 Feeding time, and after yesterday I make a beeline for the pig on a spit whilst Sarah goes for the sushi, both of which are again washed down with a thirst-quenching Super Bock Caipirinha, in the company of new found friends.

Whilst “top” may not necessarily be the answer to the previous question, arresting distraction comes in the welcome, theatrical form of 20+ year recording Industrial veterans Bizarra Locomotiva, on the main Reverence Stage. Perhaps the most eloquently named band on the bill this weekend

If you can imagine the hybrid, bastard mongrel offspring of NIN, and Rammstein, you might be halfway there with an approximation of the visual and sonic feast that is Bizarra Locomotiva.

I have probably watched too many Type O Negative documentaries to ask the question, “what do these guys look like and do when they are not on stage”, but I find myself asking the question anyway. In many respects, the answer is of course that these guys live for the performance, feeding off the energy in the hope that it will sustain their diabolical appetites, until the next fix of art imitating life propels them ever onward.

Bizarra Locomotiva, even the name evokes exhilaration, hold your attention in a vice like grip, your adoration is assured.

Black Rainbows are next to bless the Praia Stage. I am always a sucker for the tone of a Gibson SG, the melding of childhood awe with Jimmy Page’s double neck, Tony Iommi’s white version on ‘Iron Man’, and perhaps my biggest imprint, Robbie Krieger on just about everything else…

Describing themselves as, “The Italian psych-fuzz trio Black Rainbows sound like the bastard offspring of ’70s hard-rock swagger and ’90s stoner-groove; hints of Black Sabbath, MC5 and Led Zeppelin fuse with liberal pinches of Nebula and Fu Manchu. Since 2007 the band have released three full-length albums, coupled with split releases with bands such as White Hills, Naam and Farflung, and finally the recently highly acclaimed Holy Moon Ep. They have also been regulars on stages across the world having now performed over 300 gigs”.

This is a cv and pedigree that Black Rainbows excel with on stage tonight, an absolute powerhouse of a performance! 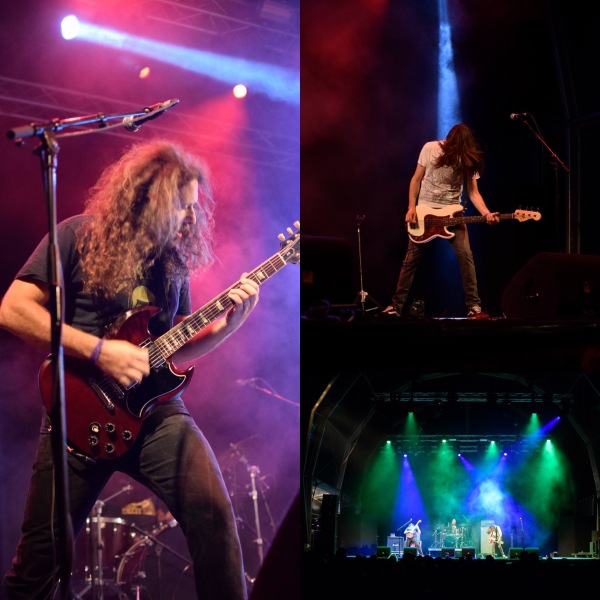 Parisian Dreampoppers, Alcest are next on the main Reverence Stage and deliver their harmonious blend of post-punk influenced, rarefied shoegaze.

UFOMAMMUT give you an insight into what Mötorhead might have been had they laid off / taken more of the happy pills, these guys tear Lemmy, with all due respect for his ongoing health issues, a new asshole! The relentless Italian barrage of droning, psychedelic sinister sludge soundscapes holds me in their thrall.

I had been looking forward to seeing The Jon Spencer Blues Explosion for what feels like forever. At some point in the dim and distant past I was meant to see them in Glasgow but for some strange unaccounted for reason, I fail to recall why this tryst was never consummated.

Anyway, Reverence Valada 2015 is when I was meant to see them and boy do they know how to put on a show! It’s like witnessing a Blues masterclass, these guys have the moves and they have the tunes. They must have been lingering with intent at that crossroads when Robert Leroy Johnson made his faustian pact, because The Jon Spencer Blues Explosion have more than their fair share, of all the best tunes.

Sleep, credited as “Stoner Rock” co-creator’s along with fellow Californians Kyuss, have clearly been responsible for attracting a large swathe of tonight’s discerning audience. Ozzy himself has been quoted with describing Sleep, “as the closest band he’d heard to Black Sabbath’s original 70’s style and feeling”.

I must confess that at their early 90’s inception, Sleep pretty much passed me by, I was too busy listening to Ministry, RATM, Cypress Hill, Leftfield and the like to find time for their unique sound, which they describe as being, “Like wind or the yawning subsonic expanse of an earthquake: something undeniably large”.

Certainly this evening, “something undeniably large” seizes the assembled, the adjacent town of Valada and probably most of the nearby countryside with Sleep’s siesmic, sonic sky-scrapering sacraments.

There remains a constant buzz around the tented village, a Festival like Reverence Valada after all, is about more than just the sum of it’s parts, the parts for some are everything.

By this time, 02:00, Sarah had just about had enough, I figured I could just about drop Sarah back at the hotel and make it back in time to see Blown Out, a prospect I had been savouring since the bill had been announced day one.

Having successfully negotiated the take-no-prisoners, 2m narrow metal bridge for the fourth nerve-racking time, we found ourselves confronted with the local storm troopers out for their Friday night fix.

I had never in my illustrious life before found myself on the receiving end of a breathalyser test – I dare say like anyone else who has, my life or certainly the events of earlier that evening feverishly flashed before my eyes! I now recall meaning to check exactly what the alcohol limit for driving in Portugal was, prior to departure…

It quickly became apparent that this 12 year-old looking toy soldier was about to appraise me accordingly. Having passed the breath test, much to Adolf’s displeasure, the pulsing vein on his temple took on a new tempo with the demand that we produce the vehicle documents.

But this is a hire car I advised, sensing the upper hand. Papers, he reiterated, that starched uniform, no doubt lovingly ironed by his mother, a fitting receptacle for the broom handle – institutionally inserted at the academy, seemingly oblivious to our previous statement. The hire documents are back at the hotel, we protested. PAPERS he again demanded, his right eyeball almost detaching itself from the socket! In the UK, we are told not to carry the documents in the car in case of theft, we replied. In a fit of apoplectic rage he finally deferred to his superior, then bid us a firm, sneering farewell.

To paraphrase The Clash, “I fought the law and I won” (sic)…

The downside to this unsolicited, unfolding drama of course was that Blown Out were by now already on stage, so much for the best laid plans of mice and men. I was absolutely gutted, but forced to concede that as far as tonight was concerned at least, the game was a bogey.