Sonic Jesus – ‘Neither Virtue Nor Anger’

‘Neither Virtue Nor Anger’ by Sonic Jesus, is perhaps 2015’s most eagerly anticipated debut LP, certainly for those fortunate souls who take their music with more than just a pinch of gravitas.

Few releases have me contemplating the juxtaposition of Platonist preponderance over Aristotle’s ‘Ethica Nicomachea’, combined with Blake’s adherence that “there is no suffering except in the eyes of the uninformed”, positing “desire as an indication of man’s infinite nature”, and “that thought be linked to the vast imagination rather than a limited perception”.

Sonic Jesus are one of those rare bands to truly spark the “vast imagination”. Their audacity in releasing a double vinyl debut album, that they describe as a “manifesto” is to be applauded, a feat reserved for those boldly eschewing any faintness of heart. Proselytising all doubters.

Sonic Jesus describe their sound as “a mix of colors and music which experiences the sound of the sixties, folk music, shoegaze and kraut nuances, a self-aware and passionate sound who has travel and discovery as its own identity”.

My epiphanous discovery of, and identification with the band commenced in January 2014 courtesy of Fuzz Club‘s Casper Dee. It has been a genuine delight and a privilege to have witnessed their performance at Eindhoven Psych Lab last June, their LP launch in London a week past Thursday, reviewed here, and to now usher in their genre-defying yet moment defining watershed debut album. 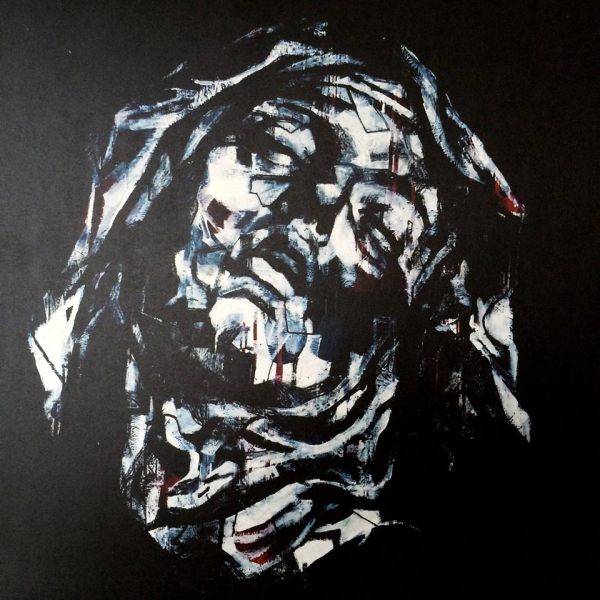 The album title alone is a tour de force, ‘Neither Virtue Nor Anger’ conjures images of an old school, heart and dagger tattoo emblazoned across the primordial figure of the Old Man Of The Sea, a water god signifying knowledge and transformation.

Then there is the sumptuously packaged double splatter vinyl with trifold cover LP sleeve, crowned with Mirco Marcacci’s luscious interpretation of Bernini’s sculpture, ‘The Ecstasy Of Saint Theresa’. Within are similar renderings by Marcacci of Tiziano and Marco. Among the sleeve notes attests, “All songs written and performed by Tiziano Veronese” and “All lyrics written and lived by Marco Baldassari” – the key word here being “lived”, the songs convey life lived with passion and passion is what separates us from the beasts, four legged or two…

The anticipation, the title and the sleeve however, can scarcely contain the trumpeting heralds within, the sonic bombast that is ‘Neither Virtue Nor Anger’ will shake the proverbial “Walls Of Jericho” of the musical firmament.

A1 ‘Locomotive’, showcases Veronese’s lyrical range, the emotive vulnerability yielding before fusing with the rising, then cascading, crushing riff; A2 ‘Triumph’, is a distorted vocal, driving tempo, gothic banquet; A3 ‘Reich’, “In My Lux Ich Bin Victim Of This Reich” – swirling organ hues, pounding convulsive defiance, tyranny overthrown, underpinned with a distinctive, MDME SPKR aka Laurie Battie chiaroscuro vocal; A4 ‘Sweet Suicide’, invites enveloping surrender, and feels analogous with Ian Curtis’ peerless appeals to earthly submission; B1 ‘Dead’, is a bouncing skipping, candy skull helter skelter ride, belying it’s title to such a degree as to suggest Jón Sæmundur’s mantra that, “He Who Fears Death Cannot Enjoy Life”; B2 ‘Paranoid Palace’, conjures carnival masquerade, laced with distortion and disorientation; B3 ‘Drift 22’, throbs with malevolent, strident insistence; B4 ‘Lost Reprise’, is here given a makeover courtesy of a Francesca Pizzo of Melampus lilting vocal, the earlier incarnation featured on the Fuzz Club Split Single No 5 release with The Black Angels, had inspired me then to write that it was a, “delicious drone layering, joined by a plaintive, rich vocal akin to a relentlessly mesmeric siren song”. Marco later forwarded the lyrics, which are reproduced below with his kind permission…

C1 ‘Monkey On My Back’, with it’s Burroughs’ intro, “When I become Death, Death is the seed from which I grow”, perhaps evokes Eric Detzer’s book of the same name, as a melancholic, cautionary tale on addiction and excess; C2 ‘Whore Is Death’, is a metronomic tribal rhythm scored, paean to duplicitous deceit; C3 ‘My Lunacy’, a shamanic desert ritual with a split personality; C4 ‘Luxury’, a sparsely arranged portentous warning, the pursuit of earthly delights tumbling the listener into a Boschian hellscape; D1 ‘Cancer’, is a discordant kaleidoscopic enmeshed anthem, brimming with simmering tension; D2 ‘Telegraph’, conjures wide-screen images of clashing cultures, modernity’s technological destruction of ancient wisdom; D3 ‘Underground’, a snarling love and courage danse macabre; D4 ‘Kali Yuga’, in the legendary Sanskrit scriptures is a time of wickedness and vice, it’s downfall ushering in the new Satya Yuga or golden age of truth. This rapturous choral celebratory finale, points more toward the Satya than the Kali, “Neither Virtue Nor Anger” – feel the agony and the ecstasy…

I have it on the very best authority that “Neither Virtue Nor Anger” could just as easily have been a triple album, should anyone out there need reassurance as to what Sonic Jesus may yet have to offer.

What I particularly love about Sonic Jesus is that they bring all of everything in their pantheon to bear on each and every track, they do so with a nuanced deftness of touch, ensuring only that which is desired from their weltanschauung registers.

“Neither Virtue Nor Anger” is available from the Fuzz Club Records Store.

For the time being and in terms of this current release, I will leave the final summation to William Blake, “what is now proven was once only imagined”…