The Mushroom Club first emerged in the summer of 2012, sprouting from the germinating spores of Sonic Shroom’s personal vision of psychedelic rock and roll. Quickly joined by Blair Miller, the ensuing debut 4 track ‘EP1‘ was released in November 2012.

Having opened the magical portal, The Mushroom Club then featured on the hypnotic collaborative release ‘Itilyna‘ by François Sky in September 2013.

The Mushroom Club are not to be confused with the 2005 Steven Okazaki documentary of the same name, though their combustive aural assault could legitimately lay claim to Jules Winnfield’s immortal line, “Well, I’m a mushroom-cloud-layin’ motherfucker” from Pulp Fiction…

Sonically, The Mushroom Club flavour is akin to a shamanic distillation, of the combined polychromatic elements of the Summers Of Love.

‘EP2‘ was just released at the tail end of January and the 5 track psychoactive sacrament is bang on form.

Opening track ‘I Love You’ sets the tone, it is a jangling anthemic, marching swagger of a colossus.

‘Blue’ shows a mellower vibe, shimmering with the kind of inflection that The Stone Roses made their own.

‘Dreams’ is an Absolem hookah induced kaleidoscopic trip, that will have you tumbling head over heels down the rabbit hole.

Penultimate track ‘Oh God’ has a spacey reverb that puts me in mind of seminal Charlatans’ tracks, at their awe inspiring best.

EP closer ‘Blues For You’ is almost like a melting pot amalgam of the previous 4 tracks’ highlights, interwoven into a rich cinematic tapestry.

I asked the band to give me a brief snapshot of what was currently going on with The Mushroom Club.

Chr – What’s next on the recording side?

TMC – We have finished writing and are ready to record an album over the next few months. We plan to release the album later in the year and it will be followed by some dates.

TMC – Next up is supporting Dead Meadow and The Cosmic Dead in Glasgow on 15th March.

Chr – What are you listening to?

TMC – For a flavour of the music, past and present, that inspires The Mushroom Club check out the frequent posts to the Facebook and Twitter feeds here; https://mobile.twitter.com/themushroomclub https://www.facebook.com/mushroomhead69?refid=12

I for one am particularly gutted to be missing out on the band’s forthcoming, mouth-watering support slot, I am in town that weekend but have to fly home on the afternoon of the gig – bummer… 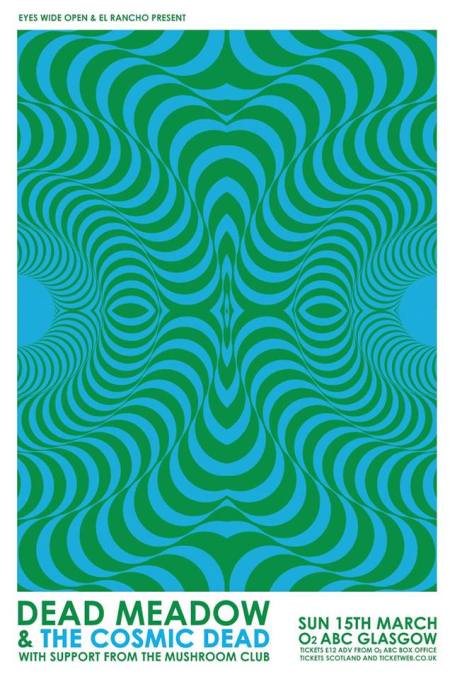 GreenFuzz – ‘This Is An EP’