François Sky first came to my attention some time last summer courtesy of those fine Helicon chappies. JP “Helicunt” had mentioned he was joining ‘François Sky & Guests‘ at the Reverence Festival Valada – that had warranted further investigation, which brought ever more sweet music to my ears.

“I’m making my music in a very normal life.” So says the humble description on François’ bandcamp page which to date boasts 18 hypnotically addictive digital tracks, all available as free downloads.

The more I listened and the farther down the rabbit-hole I found myself, I realised that a lot of the why I liked this so much, was due to being able to relate to, age-wise specifically, then there was having been on a fairly similar musical listening journey, all rounded off nicely with that holy grail of having a no-nonsense approach to not suffering fools too gladly!

It became pretty clear to me early on that here was a true musicians’ musician, someone who was all about the creative process and perhaps most importantly, who was about doing it his way, with his integrity intact.

Fast forward some months and I was thrilled to find that my then forthcoming review of ‘The Reverb Conspiracy Vol. 3‘ for Fuzz Club Records, would include François’ track ‘As We’ve Been As One’, which I described as follows, “As with any DJ worth his salt, the curators of this hand crafted compendium, having enthralled us on this supersonic roller-coaster ride, complete the assisted comedown of all comedowns with a worthy finale. ‘As We’ve Been As One’, courtesy of the enigmatic Berlin based François Sky, featuring sitar guru Jeff Levitz, envelops and cushions with a pulsatingly sumptuous splashdown in the Sea of Tranquility…”

Listen here for yourself,

François mentioned somewhere that amongst his best recent gigs in Berlin, were Spectrum and White Hills. I think it’s fair to say that the intersection point of these particular artists is as good a jumping off point as any, in describing the drone-fuelled, reverb-soaked sonic bliss of his music.

I have always considered the guitar to be a sinuous thing of beauty, and François has quite a stable of eye and ear candy in that department, all with their own names and superpowers… 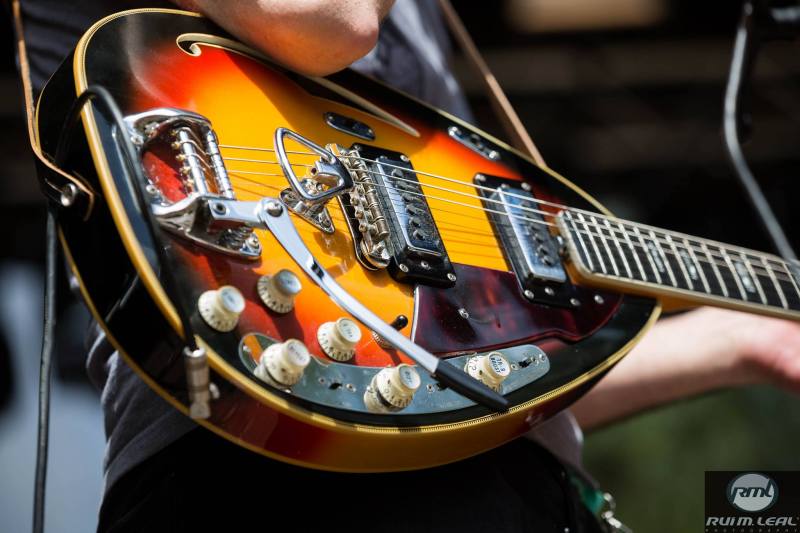 Really, my prime motivation for writing this profile, was to share the bits about François that I had got to know this past while, but also to gain a clearer picture of those hidden ingredients. Rather than just ask specific questions, I opted to throw some topics his way and here are his most gracious responses, I will let the man and his music do the talking;

Early Influences :
My parents, mainly my Mom, what they were listening to and the world around.
I was born in 1966, radios were real vectors back then.

Early Playing & Break From Playing :
Since always I needed to start playing my own stuff as a necessary thing, I’m too lame to run behind a ball with a bunch of guys wearing short pants anyway and not clever enough to often admit I really like it as it is. I really started by the age of 13. Then after I’ve napalmed the candle by both ends I decided to break with the music thing and especialy the so called involved ones, or most of them. I had some hard times getting my mind back together, then started a very different life. Not better, not worse either but for years when I was getting high, it was in a plane and just literally. This break started in 1996 after I found myself staring at my gear, which kept vanishing to pay my excesses and finally I was more spinning knobs in the end than playing actual music. I was stuck over the thrills and far away, I think.

Resuming Playing :
It took me 10 years before I made some music again with my name on it or any other of the many names I used, as I was reaching my 40th birthday I knew I wanted to get back to the sonic forge. No wish to make it, I don’t give a fuck for fame and don’t want to be depending on music to have a decent living, I need a normal life to keep myself balanced. So I need as a very necessary thing to work in a very usual thing, and then I can feel ok to do my own things. (Now I’ve spent the word ‘thing’ up to July or so). I must put both the blame and a warm thanks to my oldtime and so dear friend Igor V. for I actually have consolidated the decision to play again after a weekend we had together at my place near Bordeaux, France. There we talked about starting an online band (that is still something to maybe come real) and as he left to go back to his place, we agreed on one thing : “I’ll tell you as I got some gear again then we’ll see what goes on.” I said. He was living a few hours drive from me and before he got back there I gave him a call to tell I just bought a guitar, some effects and so on. He was wow’ed. Summer 2006, baby !

Guitar Names :
Civil aircrafts have registrations, my guitars have names. I think “Mary Anne” or “Skaia” sound sort of nicer than any Foxtrot Bravo X-Ray Juliet Sierra anyway, even when shortening it to Fox Juliet Sierra. That is just an example out of many. Even though I am a longtime addict and user of the NATO phonetic alphabet.

Recording & Sharing :
Reality has to be shared unless living in a mickey mouse kind of world, those media we can use are great and should be more used to communicate than to hammer perversion, greed, fear or lies. Cyberspace is an extension of ourself, we have to be aware of what we’re doing on it but in the end, who cares for eternity when we hardly remember yesterday or imagine tomorrow ? Here I mean it’s fine to feel free and to put whatever together then share it online, it can be anything nowadays, from ace to crap and back, but anyway, it’s always someone’s reality. And once it’s shared it’s there forever or nearly. Recording is just part of the process sometimes, or not.

Reverence :
Best festival I’ve ever been to, and I’ve made a few. My experience there as a person is much more important than as a guy playing some music. I think people in Europe should better go to Portugal than riding the Texan hype when we’re talking festivals, and what is the most important in my book : Truth.

Collaborations :
I like to make some and most of the time have a great pleasure doing so, it’s like I jeopardize myself a bit while at it, I like this feeling when it’s under both control and trust. I have a few ongoing but as long as nothing is done for certain I won’t say a word about any. I’m very happy for those I made with Nicole, Jeff Levitz and Mushroom Club.

Band :
My vision of a band has nothing of a bunch of dudes playing more or less together or even sometimes at the same time…
I do believe in work and trust, I like the idea of a core of like two guys and spinning satellites gravitating around, it involves both freedom and attraction.

The Future :
It’s something starting after each and every words, be sure of what you say or just keep silence if it’s not to ask a question.

With the enormous exception of my not playing any form of musical instrument, my only tangible “regret” in life, having read this back I am put in mind of Captain Willard’s summation of Colonel Kurtz, “There is no way to tell his story without telling my own. And if his story really is a confession, then so is mine”…

Initially, and given the things we seemed to have in common, I had asked myself if we were perhaps in some distant way related – I guess in truth, the answer in the grand cosmological scheme of things, perhaps more so for those of reading this, is that we all are…